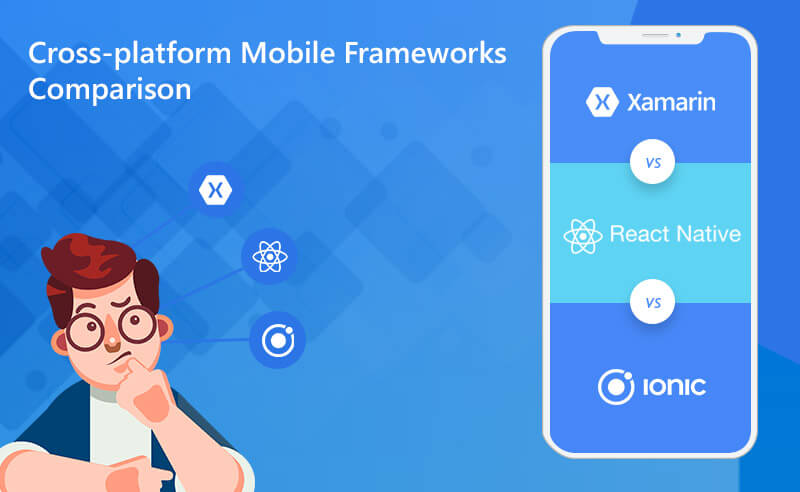 Businesses are nowadays relying on the Apps that work for both Android and iOS as they offer cross-platform solutions and can help small teams to work on an app at a faster rate than ever before. Xamarin, React Native and Ionic are three such platforms that are popularly used by top cross platform app development companies. But, the question arises as to which one of the three is best. Here in this write-up, you would find everything related to their comparison.

The React Native community is one of the fast growing ones, even more than the Facebook and happens to have been associated with innumerable contributors. Top react native app development companies make use of JavaScript, which is counted among the dynamic programming languages. There are 66% of developers who use this language and you would probably not find a problem while hiring one. Companies such as Airbnb, Tesla, and Skype are the popular users of React Native. React Native updates its features within two weeks; hence you would be able to make progress in your projects as quickly as possible.

Xamarin was the first one to be launched among the three in 2011. Over time, this community that grown into million users and is spread over 120 countries. Later on, this project was taken over by Microsoft and was included in the Visual Studio IDE. Companies like Siemens, Slack and Pinterest make use of Xamarin. It is used in enterprises that have their feat in energy, transport, and healthcare sectors. There is also an increase in the number of Xamarin developers probably more than the ones who make use of use React Native.

This version of the cross-platform was released by Drifty Co. In 2013 with its framework built in AngularJS and Apache Cordova.  Technologies such as CSS and HTML5 are used to make hybrid mobile apps.

Ionic 2 is a feasible option for prototyping and rapid development and building a multi-functional app. React Native and Xamarin, on the other hand, apps are developed to be compatible with any selected mobile platform.

Components written in Objective-C, Swift or Java are used in React Native. With this, the developers get a chance to use native code if they need to optimize an app and enhance its performance for operations like image editing or video playback. But you can’t use it for different platforms.

It works well for all types of operating systems and you would not find any issues while using it. But you would need to adjust some of the UI elements in order to make them compatible with the desired platform.

As it is open source, you would not find any issues while purchasing it and can rather just download the version.

It is available for free, for students and non-enterprise but have to pay for professional version.

It is a free open source tool that can be used for building hybrid apps. Charges have to be paid in case cloud platform is required.

With these differences, you must now be acquainted with all the facts that make each of them suitable according to your requirements. All of them have their pros and cons; it entirely depends on how you wish to utilize them.
YOU MAY ALSO LIKE
About Author